Users at Penn State University noticed that data movement activities (using tools like GridFTP) were always slow.  For whatever reason downloading and uploading data always seemed to go slow.  The problem got worse with sites that were physically separated by a great distance.

Penn State had adopted perfSONAR as a test infrastructure at certain points in their network, but not located where this particular set of users was located.  It was determined that a test node should be deployed.  The network map below shows the general infrastructure - the user was located in the lower right: 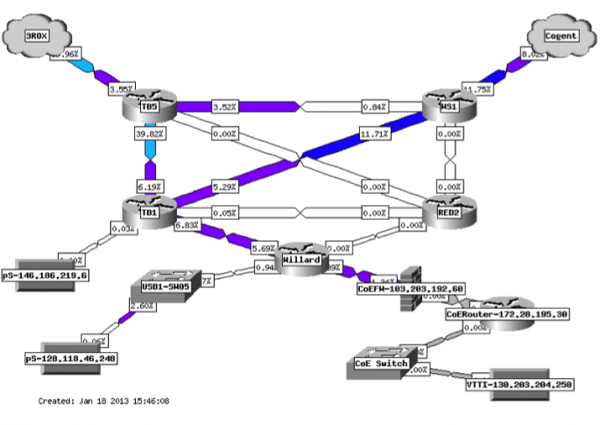 After deployment, a couple of tests were run.  Here are the results of one of those tests:

In this case low throughput is in fact observed, and we see no TCP retransmissions.  Using these observations as a basis, an investigation was started within the Penn State University network.  It was decided that the best way to figure out if this was a Wide Area problem (e.g. something outside of the campus control) versus a Local Area problem (something within the control of Penn State University) was to examine the perfSONAR tests already configured at the border of the campus.  These results are not shown, but throughput was observed to be very high (near 10Gbps) to a test point far away from Penn State.  This indicated that the location of the problem was within the Penn State network, between the border the user.

This is a powerful bit of debugging because:

The staff at Penn State now knows to look between the nodes to find the problem.  There are several possible courses of action:

Looking closer at our observation, we see a key fact to this problem: zero TCP retransmissions, but low throughput.  This typically means that we are not dropping packets, but something is not allowing TCP perform at a higher speed, e.g. could something not be allowing the TCP window to scale?  In situations like this, the first thing to check is the end hosts. There is an option in the Kernel of Linux that allows the TCP window to scale, its called net.ipv4.tcp_window_scaling (see also: https://en.wikipedia.org/wiki/TCP_window_scale_option).  To check this, run a command on each end host:

If the option is set to1, we know that TCP should be able to increase the window size as the transfer allows.  If this option is set to 0, it limits TCP to the default size of the window which typically is set to 64K.  This can be checked with a similar command (the 2nd number is what we are interested in):

If the window is stuck at 64K, and won't grow, that limits the throughput we can achieve as the latency increases.  Using the BDP calculator above, we can do the math on this:

Note that in our test above, NUTTCP told us the RTT between the hosts, it was about 10ms (e.g. 9.85 ms RTT).  This means that we are artificially limited to a throughput of no more than 50Mbps no matter what we do.

The next order of business is to determine why the window isn't growing. This can be done by investigating the path again, and using TCPTrace/TCPDump between hosts.  What we are hoping to find is a location where the TCP header switches from having  been set (e.g. when the host sets it), to something else in the path that unsets it.  The TCP header is constructed as such: 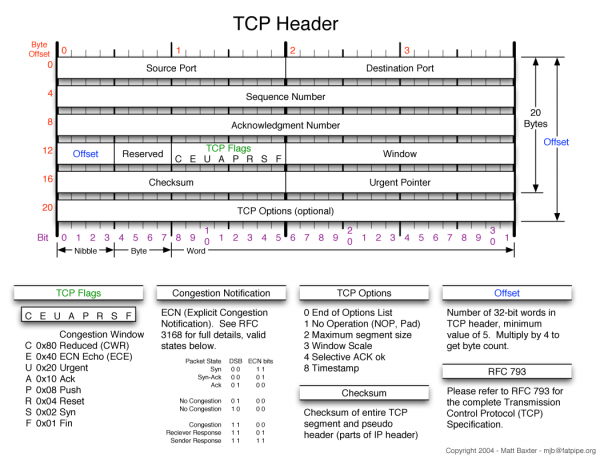 Window scaling is the #3 item in the TCP flags section.  This portion of the debugging can take a while to complete, and does involve using tools like TCPTrace and Wireshark to find the location this is happening.  After this segment by segment exercise, it was determined that the change was occurring after the traffic passed through a specific firewall.  Packet headers would start with window scaling set on one end, and as a result of processing they would emerge with the option removed.

Documentation within the firewall (and online resources: https://kb.juniper.net/InfoCenter/index?page=content&id=KB19558&actp=search) suggested that the TCP flow sequence checking settings may need to be adjusted.  After testing with this setting enabled and disabled, another run was performed that showed the following:

The firewall was re-writing packet headers, and not respecting the setting of this bit, on a consistent basis.  After 3 days of operation, the following graph was produced on the outbound link for all traffic passing through the firewall:

A large population of users was impacted, but only high performance users (those with large, long-lived flows) noticed and knew enough to complain.