Scientific users at Brown University noticed that their routine data movement activities were slow in certain situations.  In particular downloading data always seemed to go slow.  The problem was particularly bad when they were interacting with sites that were physically separated by a great distance.  Uploading data worked as expected in most situations.  Upon complaining about the problem to their local networking staff, it was suggested to try a perfSONAR test.  A machine was allocated, and deployed next to their scientific instrumentation (in this case a server that functioned with the GridFTP tool).  This new perfSONAR resource would travel the same path to the outside world that the science data would take.  A test was devised with a remote site, in this case the University of Colorado at Boulder.  The graphic below shows the observations that perfSONAR gathered over the course of a week:

Using these observations as a basis, an investigation was started within the Brown University network.  It was decided that the best way to figure out if this was a Wide Area problem (e.g. something outside of the campus control) versus a Local Area problem (something within the control of Brown University) was to set up another perfSONAR test at the border of the campus.  On the diagram below, a second perfSONAR server was allocated bear the border: 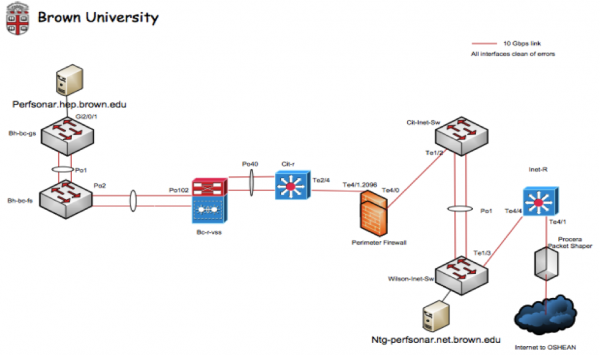 A similar set of tests was established, also testing against the resource at the University of Colorado.  After a couple of days of testing, the following graph was captured:

Observations from this graph are:

Given these results, the conclusion is made that there is a problem within the Brown University campus network, and not a problem in the Wide Area.  This is a powerful bit of debugging because:

The staff at Brown now knows to look between the nodes to find the problem.  There are several possible courses of action:

The next course of action was to look at a live test, to see what was happening to the packet train. This will give more data to the moment by moment behavior of the flow.  First the download direction was tried from the border device:

Then the download direction was tried from next to the science users.  The result shows several interesting pieces of information:

We see many TCP retransmissions, this can be a symptom of:

The first two items are easily checked on a network:

The items that remains is the performance of the firewall.  It should be noted that this particular model did not feature a rich interface that allowed SNMP like access to the interfaces, there was no way to tell if packets were being dropped by the device itself.  In situations where there is no visibility into how something is behaving, it is necessary to use more advanced tools to determine behavior. It was decided to run a TCPDump/TCPTrace on each of the perfSONAR nodes as they ran a test (similar to the examples above).  A full treatment on how to use these tools can be found here: TCPDump/TCPTrace.

The first graph shows what it looks like in the direction that is not being impacted.  We see a very clean throughput line, no TCP retransmissions and the window grows without issue: 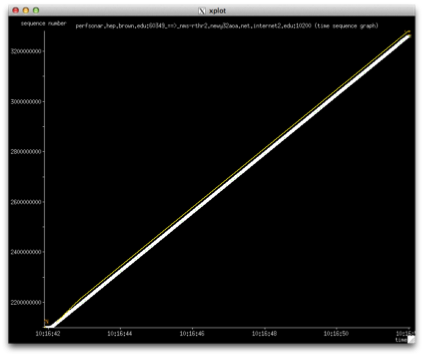 In the impacted direction, we produce a graph that looks like this: 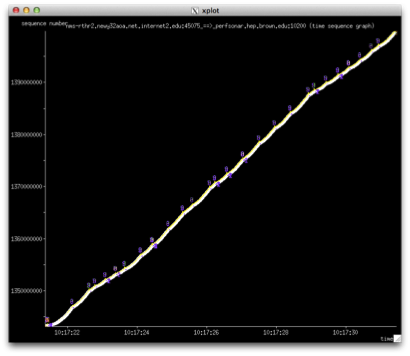 There are several things to note about this graph:

The next graph shows a larger view of an individual moment in the length of the transfer: 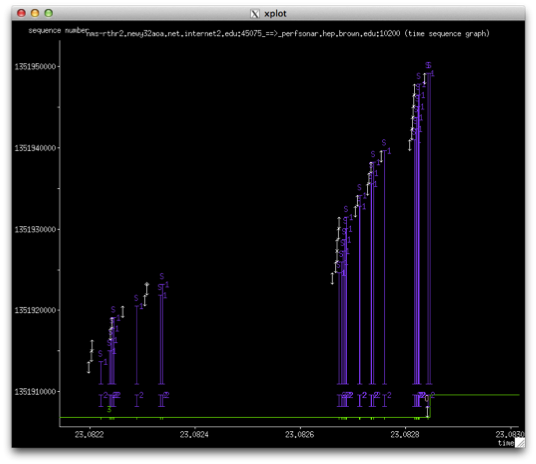 The firewall became the chief suspect int his incident.  It was never fully understood, but there are several possible theories:

The verdict is that a firewall of this nature is too limiting for high intensity traffic, as in the kind used for GridFTP transfers.  The local networking staff implemented Science DMZ approaches, and migrated the science data to a dedicated network, one that offered the same level of security without traversing the data plane of the firewall.