ESnet has assembled several reference implementations of hosts that can be deployed as a DTN or as a high-speed GridFTP test machine.

The total cost of this server was around $21K in mid 2019.  This system is being tested currently, and we be deployed to ESnet in mid/late 2020. Please note that specifics on configuration will be available after full evaluation.  Note that this server uses VROC, and requires the purchase of a premium license. 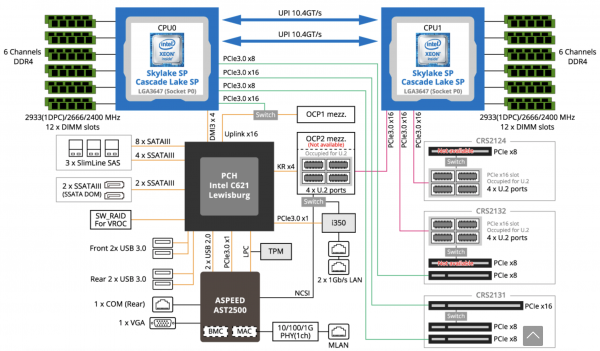 Initial system performance was evaluated utilizing two identical units, and a topology that consisted of:

The testing was performed on Ubuntu 18.04 using XFS on mdraid with O_DIRECT and standard POSIX I/O. The file sizes varied between 256 GB and 1T with consistent results between file sizes, as well as consistent results when writing pseudo-random data vs all-zeroes. Testing revealed it was possible to maintain a sustained total of 80Gbps on both connections of the NIC.  Future testing will focus on the use of 100Gbps cable cables and optics.

Testing has revealed that not all 12 cores (on a single chip) are activated regularly, unless the degree of parallelism increases.  Busy DTN requirements will push up this requirement.  Populating all memory channels in the RAM configuration also ensures peak performance, as the system is able to fully utilize and balance load as needed.

The total cost of this server was around $12K in 2014, which included 16 250G SATA-3 HDD drives, which can sustain 2.2GByte/sec (17.7Gbps) reading from disk . Depending on your DTN capacity and disk IO requirements, the cost could be considerably more. Our server is 2U but you might want to consider getting a 4U to give you more room for future expansion.

We use the most recent CentOS-7 distribution of Linux, and have configured the data drives as RAID6.  Detailed Tuning Information is here.

Performance Results for this configuration

Information on building a 100G DTN is here.