Testing over short RTTs will produce better results than long RTTs if the same parameters are used.  For example, this test between hosts goes over a 20ms RTT path:

TCP auto tuning is used (e.g. no set window size), and the test runs for a duration of 20 seconds per datum point.  The average TCP throughpout observed is in the 4Gbps range.  The second test shows a longer 50ms RTT path: 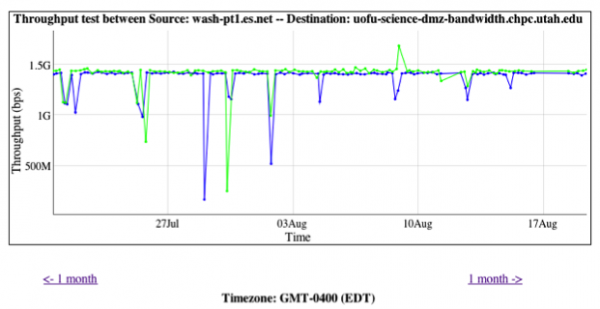 We content this is still not something to be concerned with.  The longer RTT path means TCP has to work harder to keep data flowing across the network.  The window size may not be able to grow (due to the use of autotuning) during the same 20 second test duration, reducing the overall average throughoput.

A test that ran longer, featured a set window size, or used parallel streams, could be higher.  In these two examples, there are not throught to be problems with the networking infrastructure.